I won’t normally blog twice a day and I generally won’t blog on the same day as I had the QSOs but as I’m not going to be on the wireless again today I thought I may as well post.

This was a good one.  Totally on the off chance I switched the real time QSO maps on DXInfo to 28MHz and noticed lots of lines on the map.  I unplugged my long wire and plugged the 5/8 vertical for 10m in and had a tune around.  On 28.490 I heard V5/DJ2HD calling CQ and working lots of people.  I had no idea where V5 was but gave a couple of calls anyway with no reply.  I then realised that he was calling “QRZ, up 5” and I worked out from this that he was working split frequency.  Hmmmm, I’ve never done that before but fortunately on my radio it’s very easy to do.  Press and hold A>B, push the ‘split’ button and then use the sub-tune to QSY the transmit frequency up by 5KHz.  Once I did that I called him and he replied to me first time.

V5 is Namibia!  I did a google search and discovered that V5/DJ2HD is Mathias who is operating from there from 26th December to 16th January so I was really pleased to have worked him.  He was one of the best operators I’ve heard for managing a pileup and did a thoroughly good job.

Once I’d worked him I called my son into the shack, wound the power down to 10 watts and although it took a couple of calls, David worked him as well.

The reason I won’t be making any more today is because I spent some time with Tony, G0MBA this afternoon and now my 30m QRSS transmitter is all built into a box and is transmitting a beacon on 10.140.040MHz where I’ll leave it running overnight.  I’ll keep an eye on the grabbers and see if I’m heard anywhere. 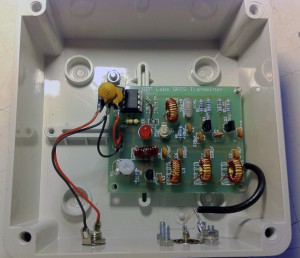