I started off day #115 by working Roger, ON7TQ on 40m.  He had a huge pileup going and was spending a couple of minutes talking to each person so it took a while to work him but it was a nice QSO once I did.

Conditions seemed so nice on 40m that I decided to put my occasional QRSS grabber on there for the day and it just seemed to get busier and busier which I guess is down to the time of the year.

I stitched together some grabs from a couple of hours in the afternoon and this is the result. 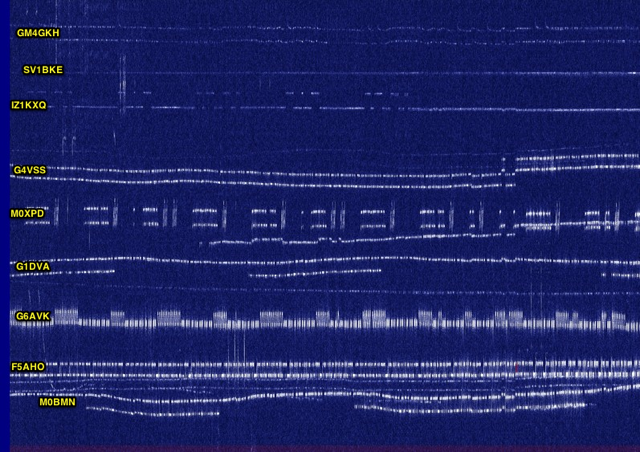 On day #117, once I’d fixed the internet and spent some time building my 80m QRSS transmitter that I blogged about yesterday I switched the wireless on and worked a couple of stations on 15m, K2HU and WA9MNF, Paul and Ed respectively.  In the evening I had a quick QSO with Alex, UA3ARC on 40m before switching over to 20m and working PA3FOE, Cor, YV6BFE, Jose, N4AOL, Carl and KA9SWE, Dale.