Day #121 started with a few JT65 QSOs on 20m, I worked RA9WE, YV6BFE, OH2BPO and OK1NZJ before jumping over to 40m SSB and working a few special callsigns – GR0GMN, Jim in Scotland, MR0XDX, Paul in Mablethorpe, 2R0NOC, Colin in Ashford, GB4HRH, Paul, GB5RER, Peter, GB0PPS, Pete in Petworth, GR3)CA, Ken in Derby, MR0MAU, Mark just outside Cardiff and finally GS3PYE/P which is a DX-Pedition run by the Camb Hams group on the Isle of Arran.  Over the last year I’ve got to know a lot of the Camb Hams guys and they’re a great bunch of people.  I was lucky enough to be the first station to work them on 40m and a big pileup developed straight after when I spotted them on the DXCluster.  After that I switched over to 20m JT65 and worked W2GPS, K1PL and VA3WLD before leaping onto 80m and having another contact with GS3PYE/P.  I then moved onto 40m and worked SQ6NEF, Tom and finally for the day GB0WHR, Simon on 80m.  All QSOs today were using GR6NHU except for the second contact with the lads in Arran where I used my normal callsign.

On day #122 I first worked SP3BJK, EA3FGN, SP3CMS and UR4MG on 20m JT65 with GR6NHU before switching over to 80m in the evening and working 25 stations in the 80m Club Championship using my normal callsign.

On day #123 I started off having a long chat with Mike, F5VIG on 40m using GR6NHU and then I moved to 144MHz where I gave away some points in the 144MHz UKAC contest.  I wasn’t specifically DX hunting but I was really please that one of my first contacts was with OZ1ALS in Denmark.  Here’s a map of my contacts. 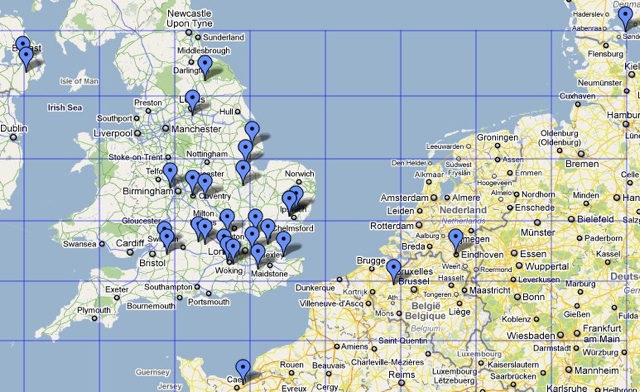 Stations worked during the 144MHz UKAC in May