I had three QSOs on day #133, I worked KA1ERL, Russell in Rhode Island on 20m JT65 and then switched to SSB and spoke to IR0LJ, Emilio.  Later I changed to 40m where I had a nice long chat with Steve, M1ACB in Ipswich.  Steve is a member of Camb-Hams and we had a talk about their recent trip to the Isle of Arran.  Steve also posts on Twitter and it was quite an amusing situation – I heard him calling CQ and replied, gave my details and said “your callsign is really familiar, I’m sure I recognise it from somewhere”.  His reply was “Yeah, hi Keith, it’s Steve”.  How silly I felt!  I met Steve recently at the Kempton Park rally so it was very nice to have a good long chat on the wireless.

On day #134 I had two early contacts on 40m with DK5DC, Peter in Dortmund  and GX6LD, a special event station for a fete near Huddersfield operated by Richard and then I slapped the wireless on 20m JT65 in the evening after watching the Eurovision Song Contest to work N0LWF, Lyle in Nebraska, KI4UMX, Henry in Georgia, WB0ZPW, Michael in Kansas, K4LRP, John in Florida and KW7E, Melvin in Arizona.

I switched the radio on when I got up on day #135 to hear a contest on the bands.  Before long I’d got 23 callsigns in the log:

It was quite fitting that the new DXCC I worked was 4K7Z in Azerbaijan because the winning entry in the Eurovision from last night was from Azerbaijan!

At this point during the day I filled up my logbook!  I’ve had this one for quite a few years. 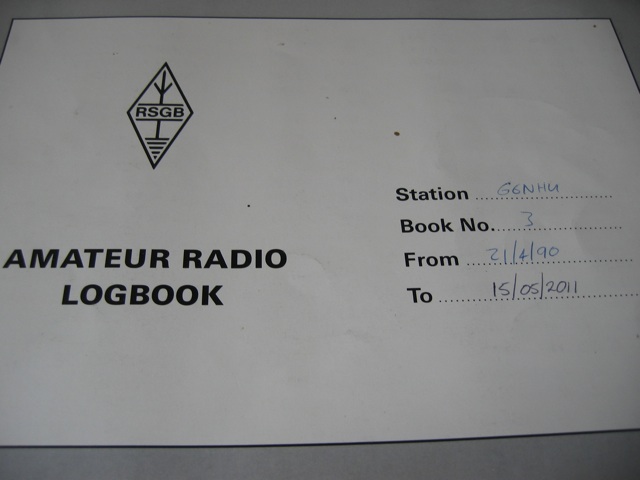 I looked back at my two previous logbooks, the first one I had lasted me a couple of years, the second one about five years and this third one was started over twenty years ago!  It’s not a legal requirement for amateurs in the UK to keep a log any more but I still think it’s a good idea and almost all my contacts are written into my log (except perhaps some contest QSOs) as well as stored in computer based logging software.

Once I’d started my new logbook I worked two more contest stations, RT6A and K1LZ before taking the family out for the afternoon.  When I got home I had one more QSO, this was with IQ4FA, Dario, on 40m.  This was a special event station for Castles on the air.