Over the last month or so I’ve been doing some experimenting using a newly built Hans Summers Ultimate 3S transmitter fitted with the new oven controlled crystal oscillator and I’m now running four different modes in a single ten minute frame with space at the end for a calibration cycle.

You should note that to be able to run this setup, you need the v3.09 or later firmware.  There is a bug with the CW timing in all versions prior to v3.09 which means that once you go above 12wpm, the CW becomes progressively harder to decode and the RBN will struggle to receive it.  If you have v3.08 you may be able to do this by setting your CW speed to 12 and decreasing your calibrate time but in any versions prior to v3.08 you can’t have separate timings for the different modes and can’t configure multiple messages so this configuration isn’t possible.

Also, I would expect you to be locked to a GPS for calibration for this entire procedure.  It may work if you have a nice stable transmitter, all manually calibrated without a GPS but I’ve not tried it that way so I can’t guarantee it’ll work.  You do need your clock to be absolutely spot on for the WSPR cycle to start on time.

The four modes are WSPR, FSKCW, CW and slow Hell.

In order to do this, I’ve set up four transmission slots for the four modes as follows:

The numbers used in the power column are linked to the messages – For WSPR I’m running 200mW as indicated by the 23 but for the other three modes, the numbers call the messages as described below.
For slow Hell, I’ve selected a frequency a couple of Hz directly below my FSKCW so as just to centre it a little bit more with that mode.

My messages are configured as follows:
” #CS” | “CQ #CS #CS TEST” | “#CS”
The | is the delimiter character (this is a solid block on the U3S screen) and the ” are just for show – You don’t enter them. Please note that there’s a space in the first message before the #.
I’ve used the short messages here to save entering my callsign multiple times. When the U3 goes into transmit, the messages transmitted are as follows:

So that’s 24wpm on CW, six second dits on FSKCW and each character takes 17 seconds to send via slow Hell.

Calibration timings are set to 01 040 which means that the calibration cycle will run for 40 seconds and there’s just enough time for this to complete before the next frame starts. Depending on your callsign length, you may need to shorten the second parameter a little bit to allow the cycle to complete.  Start with 40 seconds, watch the frame complete and then keep an eye on the timing.  If the calibration routine doesn’t finish before the next frame starts, simply reduce the time.  If you find that you simply don’t have enough time in the ten minutes to complete the transmission cycle, never mind the calibration then you can try reducing your dit setting from 6 to 5 in the Speed menu page which will help.

Frame start settings are 10 08 which means that the frame will start at 08, 18, 28, 38, 48 and 58 minutes past the hour and run for ten minutes. I’ve chosen this start time because many grabbers will stack received images and this keeps the FSKCW/slow Hell within a single stack.

This configuration means that you can be spotted by a number of different systems. You’ll get the instant gratification of being reported on the WSPR network and also your CW will be picked up by the Reverse Beacon network but be aware that you won’t get as many CW spots on the RBN as you do via WSPR. You will also be spotted by any QRSS grabbers which happen to be on the same band.

I’m sure that many of the Hans Summers kits have been sold and are only working on WSPR, simply because the owners don’t know anything about the other modes.  If this article has raised your interest in the other modes that you can run from your transmitter, or even if you already know about them, I thoroughly suggest you take a look around the active grabbers to find a clear frequency before you just pick one and start transmitting.  In particular, 30m is already very busy.  For an up to date list of current WSPR/QRSS allocations, take a look at this page.

Here’s a frame from my own grabber on 40m showing WSPR, FSKCW and slow Hell.  You can’t see the CW because it was on a totally different frequency to the grabber and anyway, at 24wpm, it would be a mere blur. 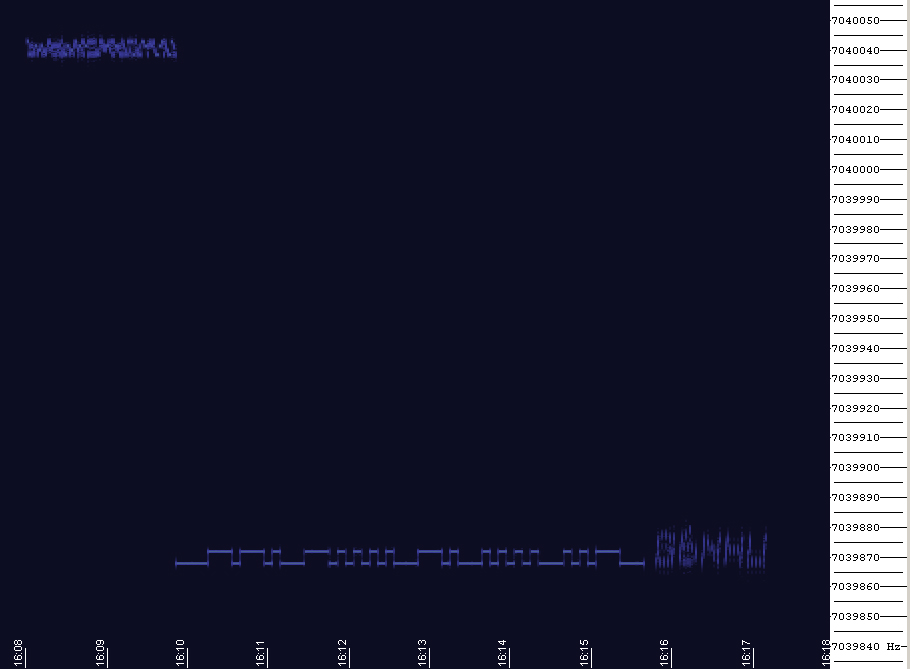 WSPR, FSKCW and slow Hell in the same frame

To demonstrate the difference in signal between FSKCW and slow Hell, here is a single frame captured at the Pensacola Snapper grabber run by Bill, W4HBK.  You can see the FSKCW is much stronger than the slow Hell.  Bill is around 4,500 miles (7,300 kilometres) away from me. 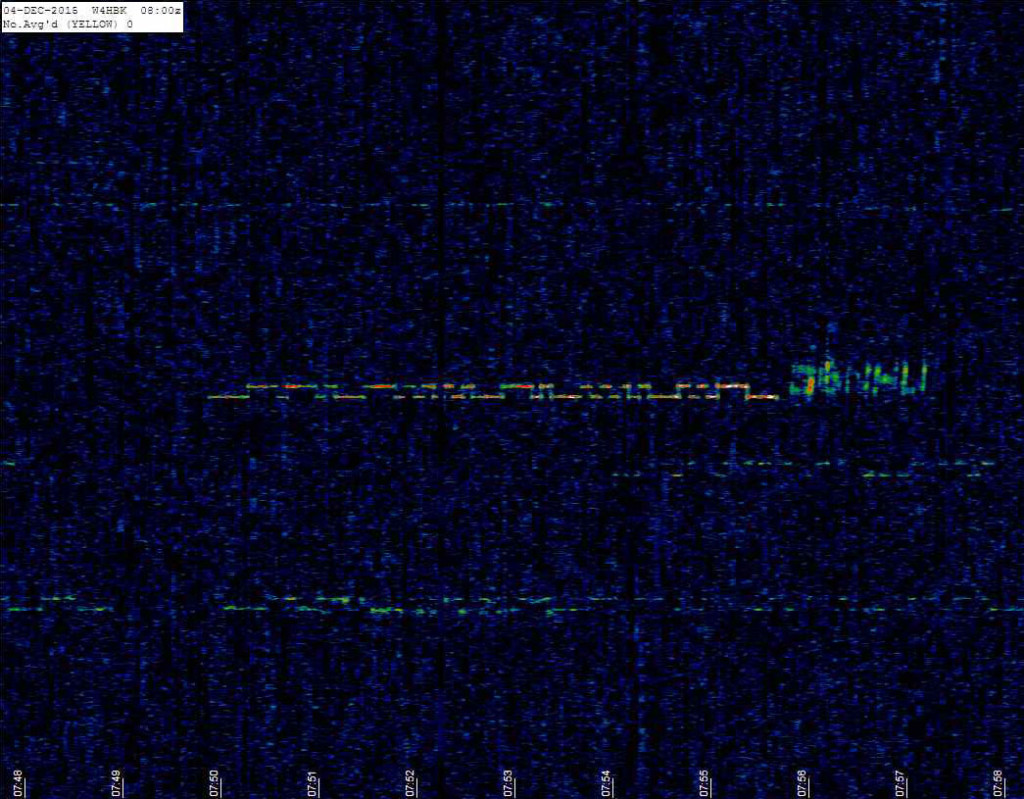 To emphasise this even more, here’s a frame made up from three stacked images at the grabber operated by Pete, ZL2IK in New Zealand.  You can see the slow Hell is barely readable compared to the FSKCW.  Pete is located over 13,600 miles (21,900 kilometres) away by long path, which is the route this would have taken. 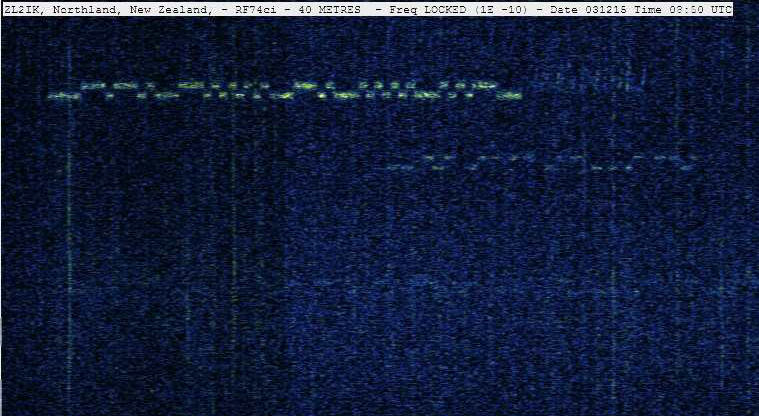 Finally the best image of the lot is another one made by Bill, W4HBK who stacked around sixty ten minute frames to produce this composite image.  It really is a testament to the stability of both the transmitter and the receiver that such a good image can be produced over such a long time. 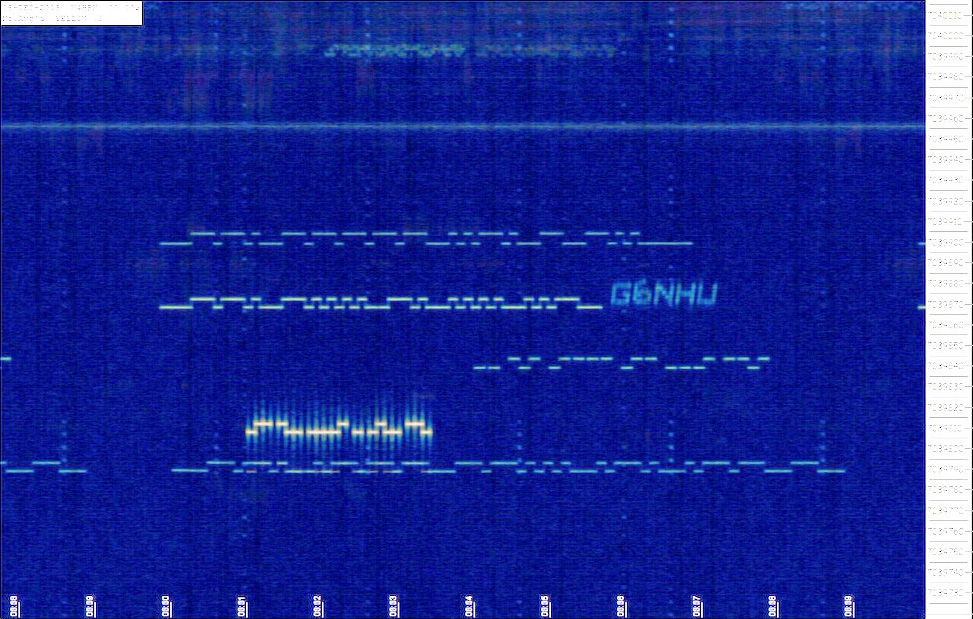