My shack computer is an Apple iMac.  For a few years, I’ve operated a lot of data modes and been very successful in data contests.  I’ve always enjoyed data modes and in 2012 I operated GO6NHU to celebrate the London 2012 Olympics exclusively using data.

Back in 2015, Apple released a new operating system called El Capitan and as soon as I upgraded to it, I noticed some problems with fldigi (my favourite data software).  I would switch to transmit, and roughly 60% of the time, the transmitted audio would come out of my iMac internal speakers instead of being sent to the radio.  It was the same with WSPR and any other software I tried which sent audio to the wireless via the USB cable.

My Kenwood TS-590 is connected to the iMac by a single USB cable.  The radio has a built in sound card and fldigi simply recognises that for everything it needs.  Data (CAT control) and audio pass down the same cable and PTT control is via data VOX.

This had worked perfectly for a number of years but broke when I upgraded to El Capitan.  I tried many things to attempt to resolve the problem, software reinstallation, replacement cable, reset the radio and other fixes but nothing worked.  One of the later patches to El Capitan did include a fix for external USB audio devices but that didn’t help either.  I found this article which went some way to explaining what the problem was although there was no recognised fix apart from reverting back to OS X Yosemite.

I simply stopped operating data modes and when Mac OS Sierra was released, I tried again but had no further success.  It was just the same.

Recently I did some more testing, I set up clean installations of both OS X El Capitan and Mac OS Sierra on an external drive to see if I had the same problem – I did.  I then built a clean version of OS X Yosemite on an external drive and it worked perfectly.  My hardware is OK, it’s just the changes to how Apple handle external USB sound cards that is the problem.  Searching the internet found a lot of people with exactly the same problem although frustratingly, it’s not universal.  I know of people with the same model iMac who don’t have any issues.

It was time to finally find a fix.  I decided to bin the USB cable and go the old fashioned way, using an RS-232 interface lead and an audio interface.

The first thing to find was a USB to RS-232 adapter.  I went with a UGreen USB Serial Interface cable based on the PL2303 chipset because it claims to be fully compatible with Mac OS.  I also needed a null modem cable to connect to the back of my Kenwood TS-590 which was simple enough to get hold of.

That completed the CAT side of things and it worked perfectly well.  I had full control over the radio from the computer and the next thing to deal with was the audio.

It’s well documented that to avoid earth loops, hums, audio feedback etc, one should use an audio isolation transformer.  I would need two of these, one each for transmitted and received audio.  There are many of these available for a few pennies on eBay or Amazon but most of them are shipped from overseas with a lead time of weeks.  This wasn’t good enough for me so I drove to the Rapid Online trade counter and bought two Vigortronix VTX-131-001 line matching transformers.  These were mounted on a piece of veroboard and fitted into a small box along with screened cable for the audio in and out. 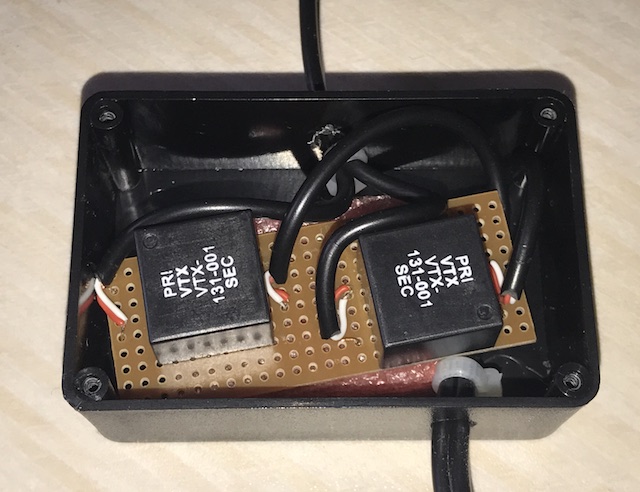 I considered using a metal box but decided that as all the audio cables were screened and as I’d put decent ferrites at each end, a metal case wasn’t absolutely necessary.  If I get any problems, I can always change the box afterwards.

With this all built and working, I connected one side of the interface to the accessory socket of my radio and the other side to the audio input and output of iMac to test.  It worked perfectly and I was back on the data modes.  However, this wasn’t ideal as it meant that I’d effectively lost all normal sound on the computer and I had to be careful to avoid inadvertently transmitting computer audio!

I did some research to try and find a USB audio device that would work properly with the latest version of the Mac OS and found reports that a fairly cheap card, the Creative Labs Play! 2 was compatible.  I bought one from Amazon because their returns policy is superb and I knew that if this didn’t work, I’d be able to return it. It arrived the next day and as once I’d loaded the drivers, it worked like a dream.

Finally after around two years, I’m fully back and able to work data modes using my iMac.