I’ve posted a lot about the low power, low signal modes, JT65 and JT9 in the past and now there’s a new kid on the block. This one is called FT8 which stands for ‘Franke and Taylor, 8-FSK modulation’, developed by Steven Franke (K9AN) and Joe Taylor (K1JT).

The biggest change from the slow, plodding JT65 and JT9 modes is the speed.  Rather than each transmission period lasting around 50 seconds, each transmission made using FT8 is a mere 15 seconds which means a QSO can be completed in around a minute and a half.  In fact, things happen so fast that the software can now control the transmission sequence.  You reply to a CQ call, if the person you are calling responds to you, the software takes over and makes the exchanges automatically.  It’s so quick that it’s actually difficult to do it manually.  You can switch the automation off and operate manually but I don’t think many people will do that.

I made my first QSO using FT8 just ten days ago and I have to say that my initial impression wasn’t positive.  I was a little frustrated that I wasn’t able to do it manually, like I’ve done with the other data modes in the past but then after a few QSOs, my opinion has changed a bit.  It reminds me of AMTOR ARQ where two stations sync together and switch between transmit and receive very quickly.  I’m actually quite enjoying operating FT8 now.

My impressions after ten days of using FT8 is that it doesn’t handle signals as weak as JT65 or JT9 (the protocol notes below confirm this is the case) and I’m convinced by the signals that I’m seeing on the bands that many stations are running significantly higher power than was common on JT65/JT9.  FT8 reports signals into the + range as well as – and I’m regularly receiving stations up to +9dB.  That’s very loud.

I think that FT8 will be picked up by big stations and I suspect that amateurs with low powered stations and small aerials are going to suffer.  They’re going to struggle to work FT8 with anywhere near as much success as with JT65 and JT9 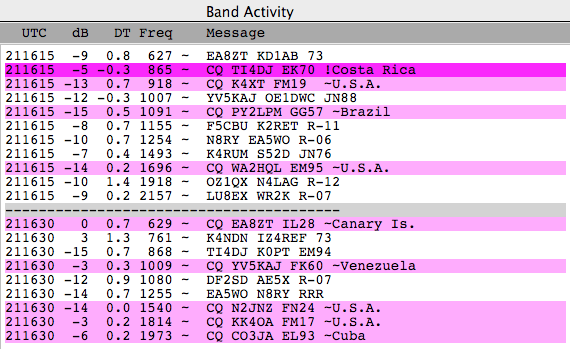 In the ten days I’ve been operating FT8, I’ve made nearly 50 QSOs and worked 33 DXCC entities.  This is very different to the early days of JT65 and JT9.  I remember calling and listening to both those modes and struggling to find anyone to work.  Every time I’ve had a session on FT8, the band segments have been very busy so the takeup of this new mode has been massive.

All these have been worked on either 40m using my OCFD or 20m using my Hexbeam.  I’ve never turned the power above 10 Watts.

This is a map of the stations I’ve received here on 20m using FT8 over the previous 24 hours. 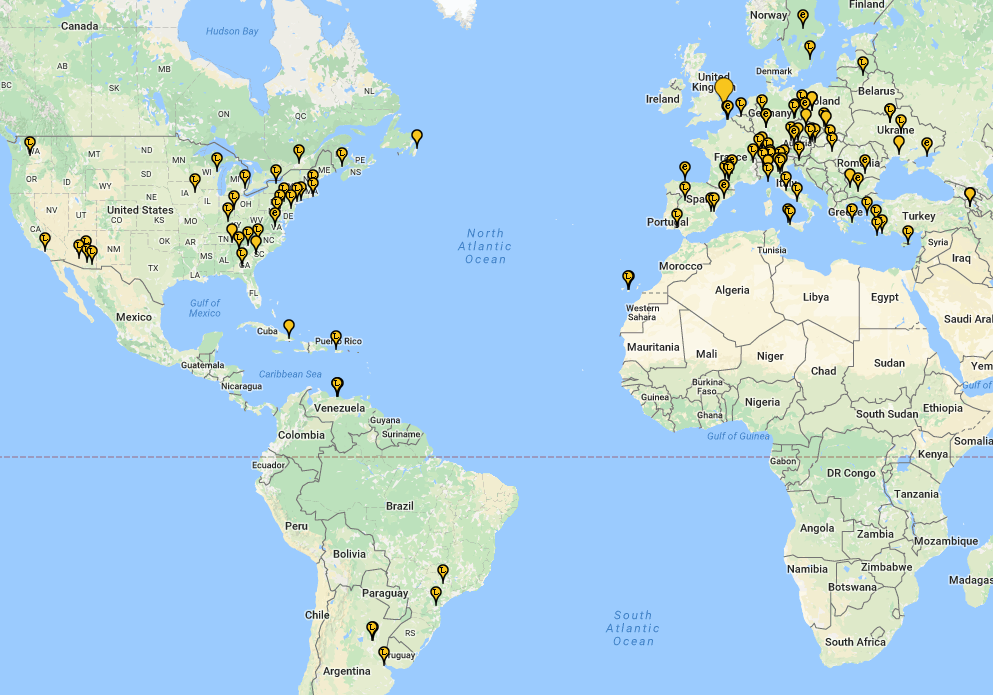 A nice feature of WSJT-X is the ability to upload ‘spots’ to the PSK Reporter site and strangely this isn’t enabled by default.  I recommend you enable this option through Preferences, Reporting and then tick the Enable PSK Reporter Spotting box.

Here’s the official ‘brief’ description of the FT8 Protocol:

WSJT-X Version 1.8.0 includes a new mode called FT8, developed by K9AN
and K1JT.  FT8 uses 15-second T/R sequences, provides 50% or
better decoding probability down to -20 dB on an AWGN channel, and
maintains good performance on Doppler-spread fading channels. An
auto-sequencing facility includes an option to respond automatically
to the first decoded reply to your CQ. FT8 QSOs are 4 times faster
than those made with JT65 or JT9. FT8 is an excellent mode for HF
DXing and for situations like multi-hop E_s on 6 meters, where deep
QSB may make fast and reliable completion of QSOs desirable.

Some important characteristics of FT8:

FT8 is included in RC1 of WSJT-X v.1.8.0 and can be downloaded for Windows, Linux and OS X from here.