I’ve only worked four stations over the three days but have been playing QRSS again.

On day #130 I first spoke to ON5KQ, Ulli on 40m – I was only using 10w for this contact and then I had a chat with Terry, G4BFS up near Norwich on the same band.  Terry was using a converted military Clansman radio and it was interesting to hear the details of the work he’d done on the set.

I worked late on day #131 and then as soon as I got home I had to play taxi so I had very little time to use the wireless and so I managed a quick JT65 contact with SV0XCC in Greece on 20m.

Similarly on day #132 I was messing around with putting my occasional QRSS grabber on 10m so just had the one contact – I worked UA9AET on 20m.

I’ve been playing with QRSS again and have recently received the kit for the 80m transmitter which is all built but just needs putting in a box and setting up – I’m going to have to modify it slightly to get it on frequency but that won’t be a problem.

When I switched my 40m transmitter on a few days ago I was monitoring my signal on a couple of grabbers and it was quite fun to see the signal drift down the band as it warmed up. 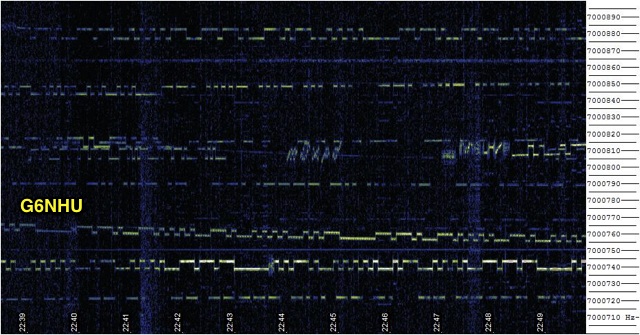 And here you can see the signal has stabilised nicely, it really doesn’t take long. 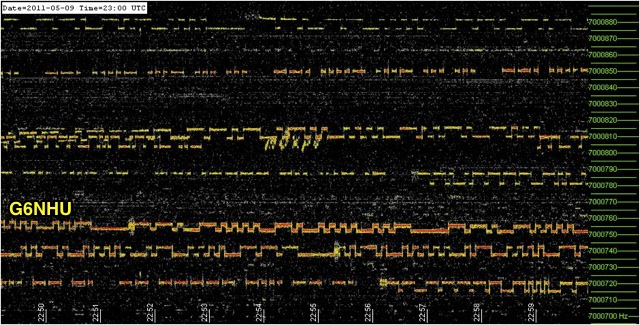 I’ve also been running the transmitter for the last day or so on 30m – It really didn’t work well with my wire when it was close to the ground but raising it up has made a big difference and I’ve been spotted on the Big Ears grabber in Nova Scotia.  I don’t have a shot of that trace but here’s a good one from IK1WVQ’s grabber showing a busy 30m band with me at the top just above G0MBA who’s using a dedicated single band dipole as opposed to my random length long wire. 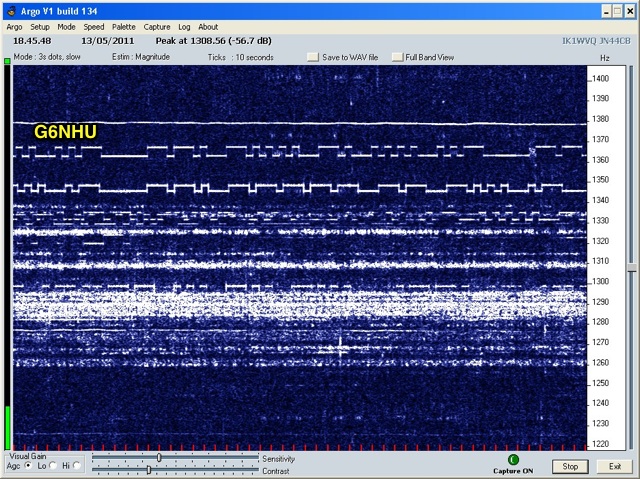 I’ve recently bought myself a CW-Keyer Tiny and it was delivered today, this will allow me to change the waveform I transmit on QRSS and will make the signal more distinctive.  We’ve also got one on order for the G0PKT QRSS station at the Martello Tower.  Sadly that transmitter is off the air at the moment due to a PSU failure but it will return shortly.