I woke up and got up around 08:00, at 08:15 I was on the wireless giving away a few points in the CQWW RTTY contest.  I only operated S&P and in 45 minutes I’d worked 25 stations starting off on 40m and switching to 20m after a while.  I worked all over Europe and even into the east coast of the USA on 40m.  The bands were good, there were a lot of stations on.

I had a few things to do today so I switched off the radio, showered and had my breakfast and then went out to go to the local radio shop to pick up a Cushcraft MA5B mini beam.  While I was there, I texted my brother Terry to say that’s what I was doing.

On the way home I had a text from him.  I stopped to read it and this is what it said:

I thought this was a bit odd considering how well the bands had been performing just an hour or so earlier so I rang him, we spoke for a couple of minutes and he said that he’d tuned around and couldn’t hear a thing.  I said that I’d look on Twitter because it’s a great source for news about solar flares and finding out what the bands are up to.

I kicked my Twitter client into action, scrolled to the top of the timeline and this was what I saw:

The time Terry originally texted me was 09:43z!  He’d switched his wireless on just three minutes after the flare maxed out so it’s no wonder he couldn’t hear anything.

I arrived home just a few minutes later and took the following screengrab from the D Region Absorption Predictions site which clearly shows what had happened. A major absorption event caused by the solar flare. 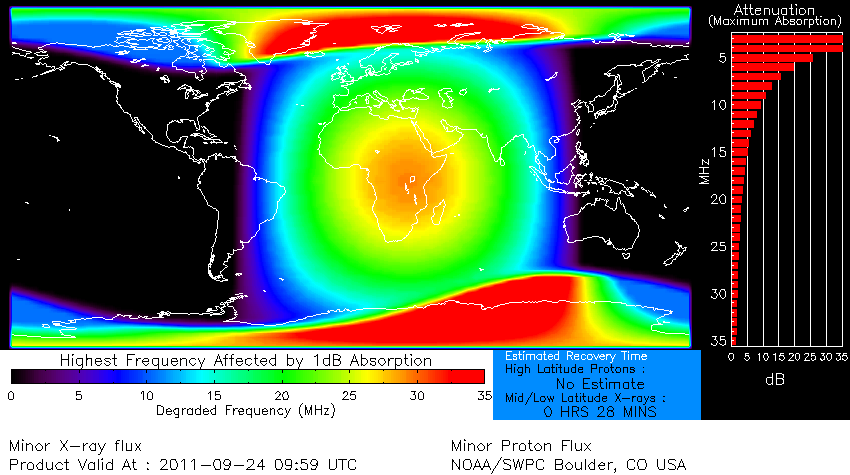 When I switched the radio on at that time the bands were already starting to clear up but at time of writing conditions are still very much down on what I’d expect.

Here are screenshots from two QRSS grabbers which clearly show what happened when the flare hit at 09:40z this morning. 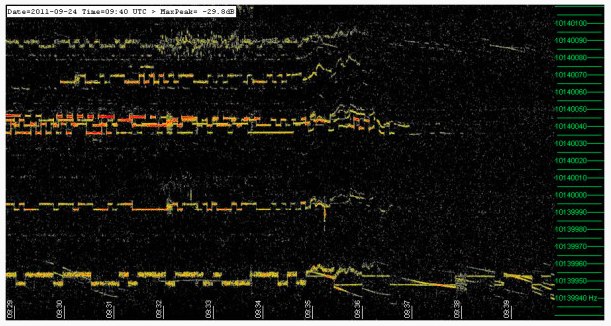 Taken from the G6AVK QRSS grabber 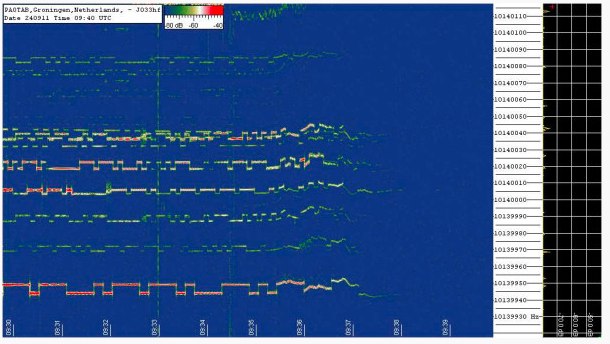 Taken from the PA0TAB QRSS grabber

It’s a real pain when things happen like this but it just shows how much our hobby, our scientific, technical hobby can be so greatly affected by nature and we have absolutely no control whatsoever over it.  It fascinates me.

One minutes conditions are good, signals are strong and then wallop, everything goes dead.