Last night was the final 144MHz UKAC Contest of 2010 – I’ve been putting in entries all this year as part of the Martello Tower Group and for a small group, I think we’re doing very well.

Yesterday was my daughters birthday so it would have been very unsociable of me to go to the Tower to operate so I just ran S&P from home for a while and then called CQ for the final ten minutes or so.  I worked a total of 36 stations in 13 squares.  It’s not a huge amount but my scores will be added to our group total. 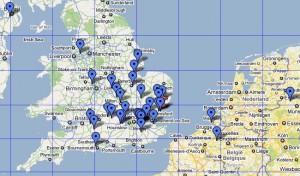 The group did very well at the Martello Tower, working 80 stations in 20 squares which is our second best score this year and it should give us a nice boost in the final scores.  I’ll post more on those once they’re published.

Next Tuesday is the final 432MHz UKAC Contest of 2010 – We’ve only done the last three of these for a bit of fun so we’re hoping that we’ll have a good finale for the year to get us in the mood for 2011.