No, you’ve not inadvertently clicked on a ‘Men’s Grooming’ website, this is still my amateur radio blog but I thought I’d write about something that affects 50% of the population, ie the male half.  The daily chore of scraping whiskers from our faces.

I almost forgot that many radio amateurs are bearded.  If you’re bearded and don’t want to read this, then that’s fine but if you carry on, you may just decide on a change.  If you shave daily but don’t enjoy it, keep reading, this may change your life.

Firstly some background.  Around twenty years ago I decided that I’d had enough of the daily ritual of shaving and started putting on facial hair. I absolutely hated shaving every day and had grown to resent the time spent doing it so initially I grew a moustache which was followed by a goatee and then eventually a full face beard.  It was great, all I had to do was go over it every couple of weeks with a trimmer and the job was done.  No more daily scraping my face.  However as I got older, my beard started getting a few grey whiskers, then a few more and then suddenly there was more grey than black.  I could live with this, I still didn’t have to shave.

Then I saw an article somewhere about shaving with an old style safety razor, the sort that was common many years ago before the invention of the cartridge razor.   It was described as enjoyable and that intrigued me.  So I looked around and did a little research and bought myself four things.  A safety razor, cheap badger hair brush, some shaving cream and some a couple of packets of blades. 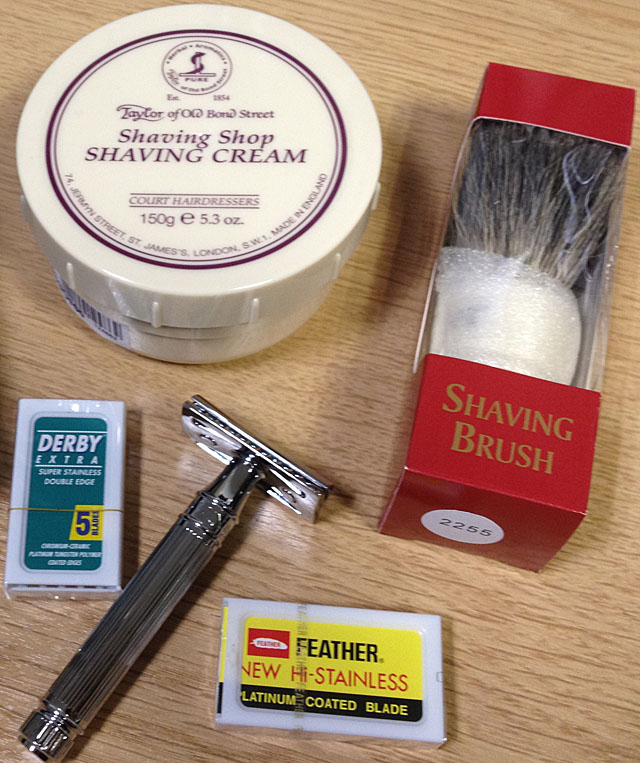 I cut my beard as short as I could with the trimmers, and went to work using the kit above.  What resulted was a fantastic shave, perhaps not as smooth as it could have been but certainly pretty good for a first attempt.  I left my goatee on (I’d feel naked without any facial hair) and concentrated on the rest of my face.

The article I’d read was right, it was enjoyable.  For perhaps the first time in my life, I’d had a shave and enjoyed doing it.  Initially I’d planned on just shaving once or twice a week but the act of making a good lather and brushing it onto my face is so enjoyable that I’ve been doing it almost every day since.  It’s addictive as well, after just a few months I’ve now got three razors, one of which is a vintage Gillette, made in the year I was born.  I’ve bought another brush and I have a wide selection of creams and soaps to choose from and I now look forward to my daily shave.

I like traditional stuff, I still refer to the radio as the wireless and I listen to the Archers every day.  I’d choose a valve amplifier over a transistorised one every time.  I like the idea that I’m using a technology that’s over 100 years old and can give me a better and more comfortable shave than a modern multi-bladed cartridge razor and canned goo.   I like the fact that this old equipment can be paired with modern blades and there’s no compatibility problems.  I like the fact that I could buy a vintage razor from eBay that’s been used by many other people before me and has real history attached to it.

Here’s a better picture of the first razor I bought, an Edwin Jagger DE89L, hand made in Sheffield. 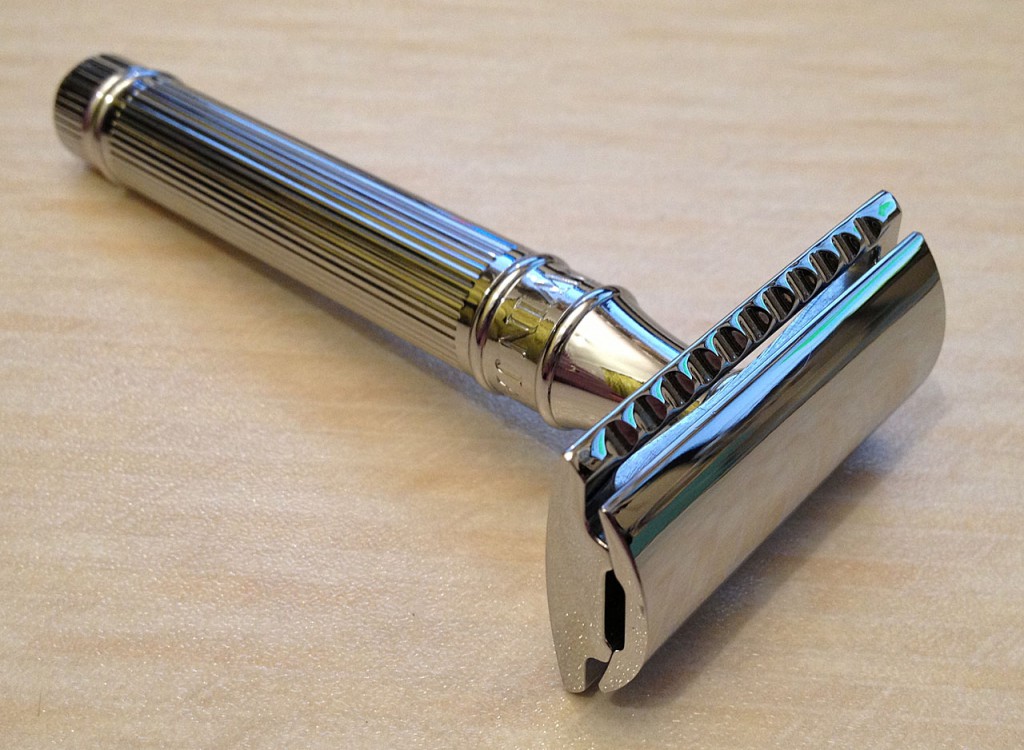 It’s also very cheap to shave with a safety razor.  Consider the costs of the latest Gillette cartridges – They work out at around £3/cartridge and you get maybe six or seven average shaves out of a cartridge before the blades go blunt although many people push them further due to the cost.  I can buy 100 blades for my razor for £10!  The cream pictured above was £7 and will last for months compared to £4 for a tin of goo which lasts a month if you’re lucky.  Even taking into account £20 for the razor and £15 for the brush, it’s still significantly cheaper than using cartridges.

The best thing though is the quality of the shave.  Once you’ve got the hang of it and found which blades work well for you (all faces are different, what suits one person may not work well for someone else), you will get closer, more comfortable shaves with no irritation, no razor burn and no ingrowing hairs.  Forget the latest multi-blade cartridge razor or electric shaver, they pale into insignificance.  The only better shave you’ll get is by using a straight, or ‘cut throat’ razor and that’s something I’ve not even considered trying (yet). 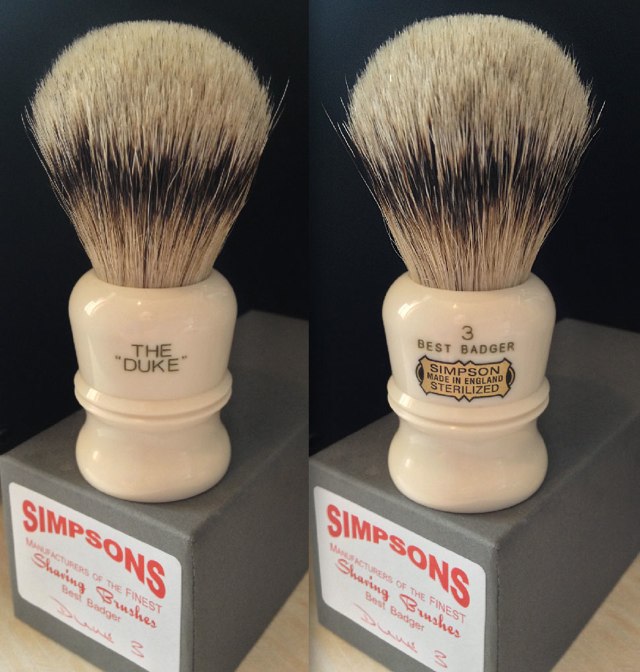 If this post has made you think about making a return to wet shaving the traditional way, there are many places on the internet where you can find out more.  The Badger & Blade forum is a good place to start with many great guides and useful info.