This contest has changed from last year – The new rules can be seen here and if I’m honest, I found some aspects to be a little confusing so I emailed the adjudicator to get some clarification.

My entry was in the “High Band” rounds and I made just 157 QSOs on 15m with nothing particularly exotic worked.  The highlight was being called by 5V7JD Jack, just before the contest started while I was warming up and that was a welcome new mode slot for Togo.

Last year the section I entered was just four hours long and I made only 41 QSOs, ending up 18th out of 37 entries so I’m hoping for a better placement this year in the Single Operator 15m section.

My full log analysis can be seen by clicking here.  If you look at the analysis you’ll see what looks like nearly 30% of duplicates – I said the rules were confusing as this contest is broken down into ’rounds’ and it’s allowed to work the same station in more than one round.  What’s strange is that the rounds for each section just follow straight on from each other.  My claimed score shows as zero because my logger really doesn’t know how to score this contest! 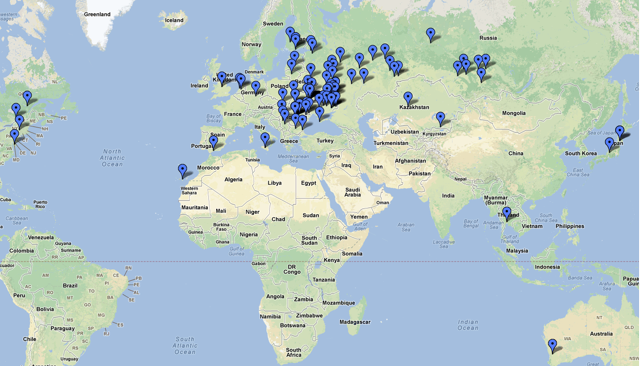 Map of stations worked during the Open Ukraine RTTY Championship 2013