Power is always an emotive subject so I thought it would be interesting to review transmitter power levels and see what difference increasing power makes to your signal.

To start with we need to look at how signals strength is measured. In 1981 the IARU Technical Recommendation R.1 was that S9 on the HF bands is a receiver input power of -73 dBm which equates to 50 uV at the antenna input assuming the input impedance is 50 ohms. It also suggests that there should be a diffence of 6dB per S point.

If you increase your power to 20 Watts, your signal strength will now be S5.5 because each time you double your output power, you’re increasing it by 3dB – As already said above, one S point is equal to 6dB difference in signal.

Double your power again to 40 Watts and your signal strength will now be S6.

If you then increase power from 40 Watts to 50 Watts (the limit for UK Intermediate licence holders), that’s just another 0.9dB gain which is less than one third of one half of an S point. In reality, it probably won’t even be noticed.

Let’s start this at 50 Watts. Again, your 50W transmitted signal is being reported by the other station at S5.

You double your power to 100W which is a 3dB increase and will give you an S5.5 report.

Fortunately you’ve got a Kenwood TS-990 or an old FT-1000 with 200W output so you turn the power up to full which is another 3dB gain to give you a S6 report.

It’s time to get serious. You spend a load of cash, buy an amplifier, plug it in and and double your output power to 400W (another 3dB) which takes your received signal up to…  wait for it…  S6.5.

If you want to raise your signal to S7, you’d need to increase your power by another 3dB up to 800W which of course you can’t do in the UK.

I’ll give a third scenario.

If you start with 10W and a received signal of S5 and increase your power to 400W, that’s a gain of 16dB which will take your signal up to just over S7.5.

Finally, if you’re running 100W and the station you’re working gives you an S9 report, you’d need to increase power to 1kW to increase that report to S9+10dB or up to 10kW for the report to go up to S9+20dB!

As you can see increasing power in order to improve your transmitted signal strength really is a case of diminishing returns – You have to double your power each time in order to benefit from just half an S point in signal. It’s far better off to make improvements to your aerial system than to increase power because then not only will the station you’re working benefit from a stronger signal from you but you’ll also benefit from stronger received signals.

In practise, this is what the difference will look like on your s-meter. 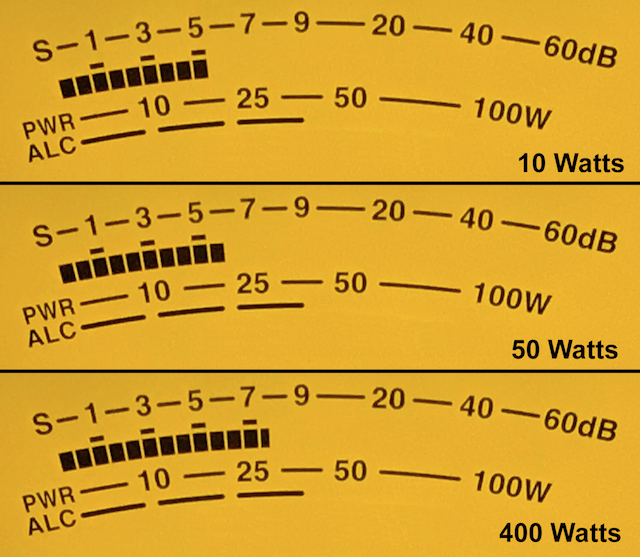 Difference in signals between 10W and 400W