I ran 40m (7MHz) QRSS into my main HF long wire and reached Pensacola on the first night I tried and after this for some strange reason I had nagging doubts in my mind about my 30m QRSS transmitter.  I set it all up and configured the monitoring software to make sure it was on the correct frequency and then I noticed that the needle on my meter just wasn’t swinging at all.  Now the transmitter only runs around 150mW but I’d expect to notice some small movement.  I connected up the 40m QRSS transmitter and could detect a needle movement so I reconnected the 30m kit and tweaked the output pot only to see absolutely nothing moving.  My end deduction from this is that not only is my long wire rubbish on 30m but also that the output FET on the kit has gone pop.  I’ve ordered a couple of replacements.

In the meantime I thought I’d see if my 28MHz 5/8 vertical which has been working so well on 15m would tune enough on 10MHz to perhaps work with the QRSS transmitter when I get it fixed.  I connected the radio through my MFJ-974HB tuner and tuned the aerial on 10.1387MHz.  I then fired up the WSPR software and after one transmit cycle, I checked the map.  This is what I saw. 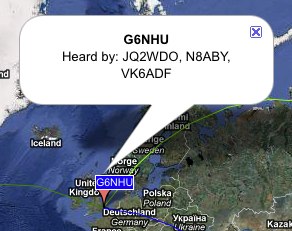 My 5 watt WSPR signal had been received in North America, Japan and Australia.  I think the answer to my question of “does my aerial work on 10MHz?” was a resounding YES!

I reduced the power down to 2 watts and ran WSPR from when I went to bed until when I got home from work the following day.  There was a gap of a few hours in the middle of the night when the software had locked up but apart from that it worked really well.  To show how well it worked, here’s the database of spots both seen and heard during the day: