I started off day #219 by having a couple of QSOs on 20m, first I spoke to M0GYQ/P, Rob and then a bit later I was tuning around to hear someone asking if the frequency was in use.  Predicting a CQ call I listened to hear the same station ask a further twice whether the frequency was in use.  There was no answer and so he started calling CQ.  I replied to his call and had a quick chat with Nino, IT9RYH on 14,195kHz.  The conversation was only brief because a number of people started jamming.  I know Nino’s reputation for always sitting on that frequency and I’m quite sure that it’s a reputation well earned but in this case I really don’t think he was treated well.  I heard him ask three times if the frequency was in use and there were no replies.  He called CQ and I answered and immediately we were jammed.  People may not agree with the way he always uses the same frequency as it’s part of the DX window but he’s surely DX to someone.

Later in the evening a group of us had decided to try and use the Feld Hell mode on 40m and so I found a frequency and started calling CQ.  Unfortunately neither of the other stations could hear me but after fifteen minutes or so of calling CQ I had a reply from F5JQF, Yves and we had a chat for about quarter of an hour.  Hellscreiber is a strange mode which paints the text on screen.  It’s not quick, but it was really fun to use. 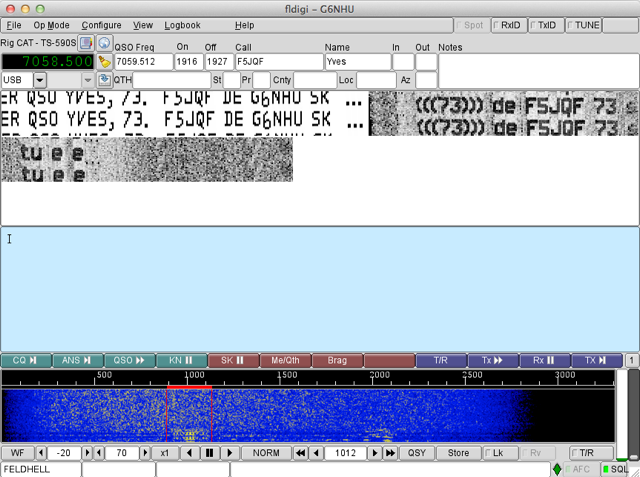 On day #220 I first worked SK2AT, Per on 6m and then later in the evening I switched around the bands looking for ST0R, the DXPedition to the Republic of South Sudan which gained its independence on the 9th July 2011.  ST0R had been operating there from the 22nd July and I knew there were only a couple of days left to work them.  I’d kept my eyes open for them on the cluster and although I’d heard them briefly on 10m and 20m previously at no point were they strong enough to work.  I worked my way up to 17m and there they were on 18,145kHz with a nice strong signal, a real 59.  I quickly decided to call them and it was less than a minute later that I heard “Hotel Uniform?” come back.  I replied and after one quick callsign correction I’d worked them!  I’m very happy with that quick QSO and very pleased to have them in my logbook.  I checked the next day and there it was on their website.