Back in March 2011 I wrote about three different modes of communications, EchoLink, D-STAR and QSONet. In that piece, I discounted all of them and although I said that D-STAR was the one which most interested me, I wasn’t planning on using it due to a lack of any D-STAR repeaters nearby.

Fast forward to earlier this year and I received a telephone call from Tony, G0MBA who had seen an article in the RSGB magazine, RadCom about Icom offering to donate D-STAR equipment to groups to help them set up repeaters.  We discussed it at length and decided to try and get involved with this.  We talked to the rest of the Martello Tower Group members and an application was made to Icom.

We were successful and on the 14th April 2015 Icom told us that they would provide us with a VHF Repeater Module and Controller for a D-STAR repeater.  Our plan was to remove the GB3TE repeater which had served the local area for over twenty five years and replace it with D-STAR.  We submitted an application for an NoV for GB7TE and that was issued on 28th May 2015, a very quick turnaround.

On the 4th June, a big box arrived from Icom containing all the repeater hardware. 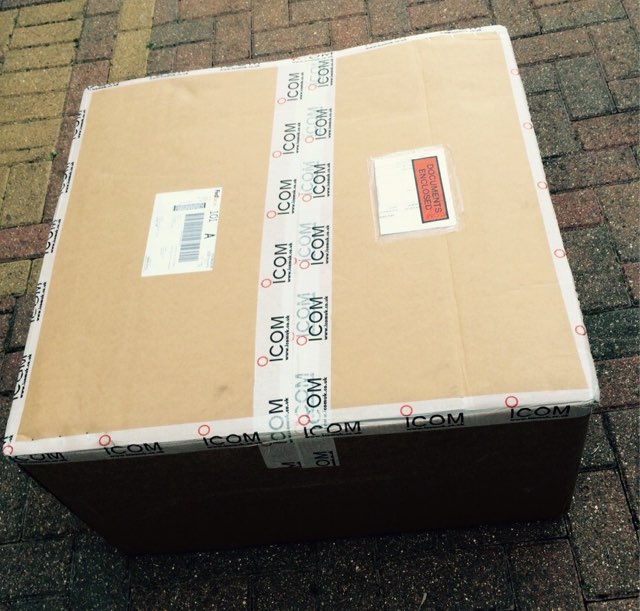 A big box arrived, all wrapped in Icom tape

We’d been doing some background work, looking at documentation and sorting out hardware for the server which was going to run GB7TE and on the 13th June, Tony G0MBA, Peter M1BRR and myself all met up to start assembling and setting up the repeater. 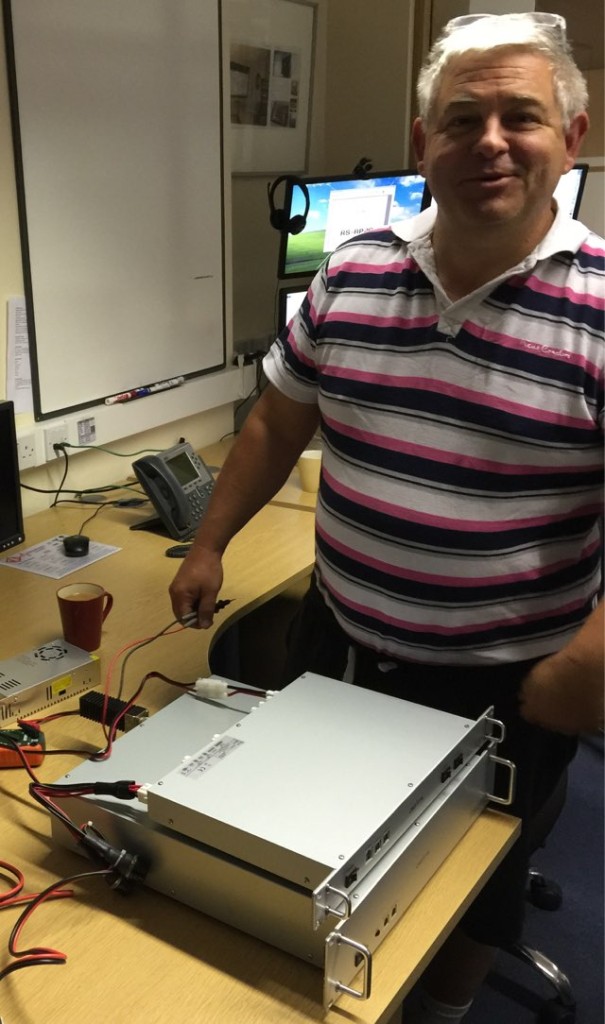 We had quite a few problems getting GB7TE actually built.  We went through three or four different PCs and servers and around six or seven different versions of Linux until we got the one which worked as intended. It was a major learning curve as none of us really knew anything about setting up a D-STAR repeater until we started this project.

Finally, after multiple false starts, quite a few bottles of beer, some cakes and even a curry, on the 5th of July we had a working system and on the 8th July, it was fully connected to the D-STAR network and on test at Tony’s workshop into a dummy load.

On the 17th July, the new GB7TE rack was installed on site at Holland-on-Sea, at the bottom of the radar tower.  We were almost ready to go. 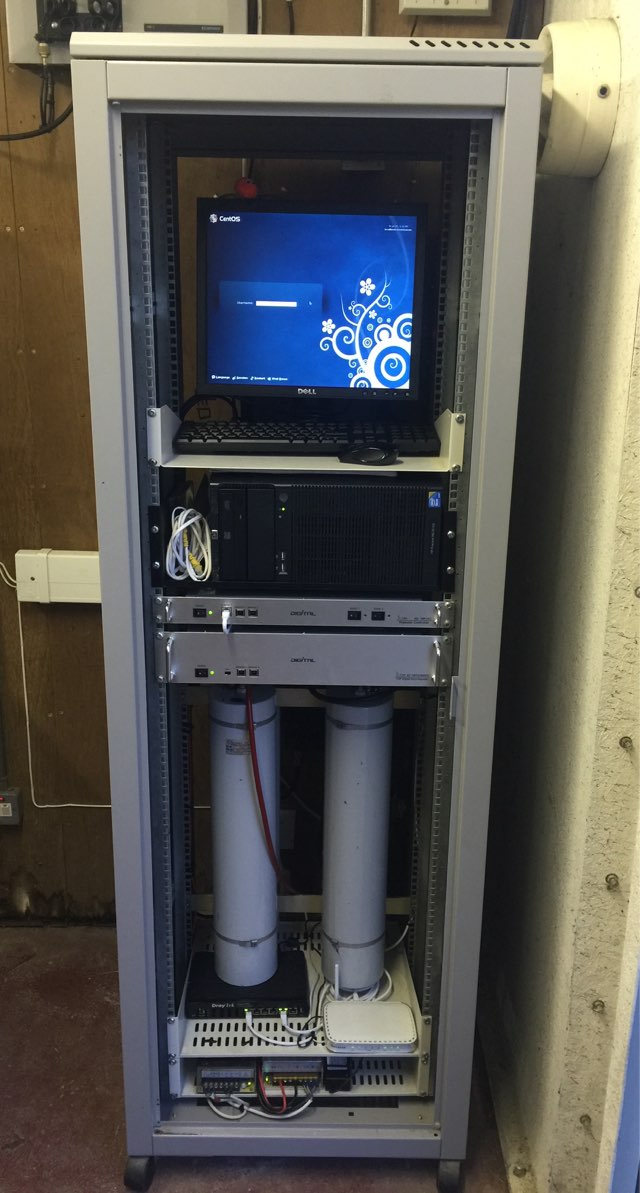 GB7TE on site at Holland-on-Sea

The repeater ran for one day as a single, stand alone box before the ADSL connection went live and on Saturday the 18th July 2015 at 14:25z it was connected into the D-STAR network.  We were live! 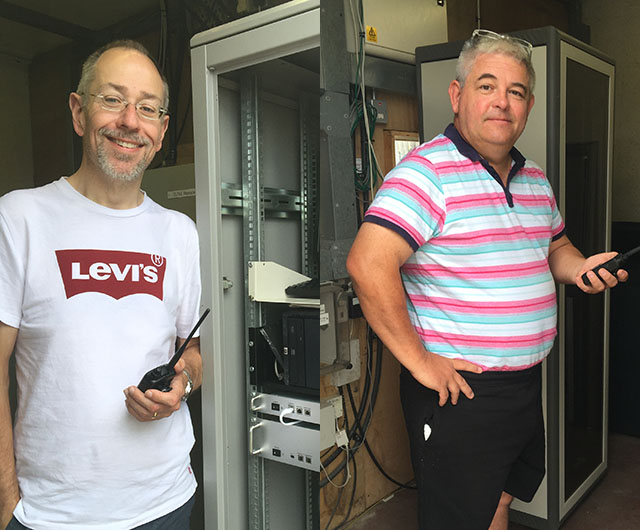 It wasn’t all plain sailing though and the next few weeks saw repeated visits back to the tower to make tweaks to the setup.  We had quite a few problems which were eventually all tracked back to a faulty ADSL router and once that was finally replaced, everything has been working well since.  We also persuaded some local radio and TV personalities to record some voice announcements for us and they’ve been on air identifying the repeater every fifteen minutes since the 11th November 2015.

As a result of all this, I borrowed an Icom ID-51E handheld radio and after having used that for a couple of weeks, I decided to buy my own D-STAR wireless and I bought an Icom ID-5100E, removed the Kenwood TM-D710GE from my car and installed the 5100 instead. 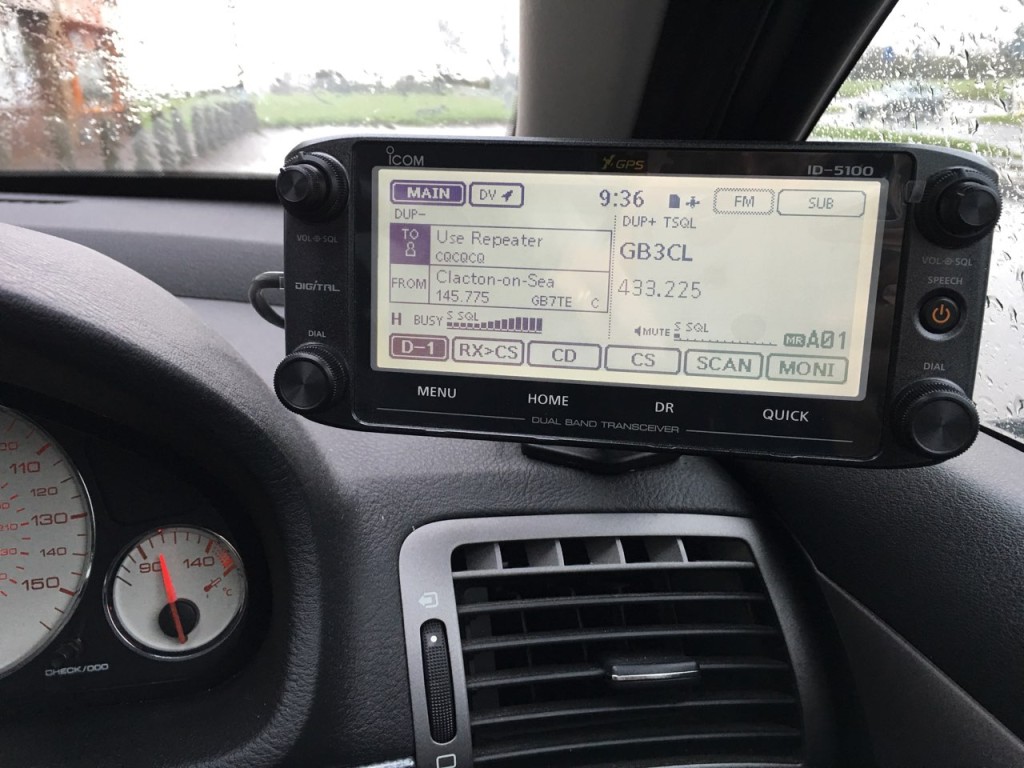 Despite the fact that Icom don’t supply a proper mobile mounting bracket for the control head, I bought their MBA-2 and paired it with a RAM Mount RAM-B-102U-A which I imported from the USA and that does a great job of fixing the head to the dashboard.  For what it’s worth, I think it’s pretty crazy that the only bracket Icom produce is a suction mount.

So how am I finding D-STAR?

Honestly, I still don’t really care for the internet part of it.  I’m more than happy to use D-STAR but my normal procedure when I get in the car is to unlink GB7TE from any reflector it’s connected to and have a shout through it.  If nobody replies, I’ll link it back to a reflector to listen for a few minutes and undoubtedly, after a while, I’ll repeat the procedure.  I don’t mind listening to other people chatting but as I said in my previous entry, I’m not interested in talking to someone thousands of miles away as I’m driving to and from work. Conversations through repeaters are normally just people talking fluff to pass the time as they’re driving around.  I don’t mean that offensively, I’m sure I’m just the same as I waffle on about nothing in particular to local friends!

As for the Icom ID-5100E though, that’s a different matter.  It’s an absolutely superb wireless.  Once programmed, it’s incredibly easy to use and the touch screen is a real joy.  I was originally going to set up the Kenwood I took out of the car in my shack but I’ve decided to get another ID-5100 to use indoors instead.

Perhaps my opinions on using D-STAR through the internet will change as I become more familiar with it.  If you have D-STAR and want to give me a shout to tell me I’m wrong or just for a quick chat (about nothing in general), I’m normally on in the mornings as I drive to work for half an hour or so at any time from 05:30 (UK time) onwards and listening to GB7TE which is generally linked to reflector REF001C.  You can check the status of GB7TE by clicking here and I’ll always transmit something to it when I get in the car so my callsign should show on the list of last heard stations.  I’m travelling home from work and in range normally from around 16:15 (UK time) on weekdays.